Living In Hope; the complete memoirs of Mr. Frank Byrne

Living In Hope is a distinctive memoir by Stolen Generations survivor, the late Mr. Frank Byrne, in which he tells the story of his life-long search for his mother.

It was Mr. Byrne’s dream for his complete memoirs to be published as part of the truth-telling movement for future generations. Ptilotus Press is currently working with the Byrne family and co-authors to make this dream a reality.

“This is a very strong story of survival. A tragic reminder of the harshness and unfairness of the mission era but also the toughness and determination of our people.” – Bruce Pascoe

As a not-for-profit community publisher, we rely on donations and project grants to generate our publication budgets. To date, we have recieved support from the NT Heritage Grants Program and the WA History Foundation which has made editing possible. We are now fundraising for the next phase of graphic design and printing costs. Would you like to support this important work? There are a range of ways you can support! Click the button below.

Photo by Chris Hallet, 18 August 2015. On the road between Halls Creek and Fitzroy Crossing.

In 2015, Frank Byrne journeyed from Alice Springs through to the Kimberley with Frances Coughlan & Gerard Waterford to retrace his childhood steps & write his life story. Driving west on the Tanami Highway, he would say "those rosary beads keeping us safe". Photo by Chris Hallett,15 August 2015.

Writing on the road. Frank Byrne sits with Frances Coughlan and Gerard Waterford in their 'office' at Gnylmarung, just north of Beagle Bay mission on 21 August 2015. The son of a Gooniyandi woman and Irish stockman, Frank was born on Christmas Creek station in the Kimberley on 20 July 1937. He is a child of the Stolen Generations, taken from his mother at the age of six. Frank spent the next nine years at Moola Bulla settlement and Beagle Bay mission.

Frank Byrne visits Beagle Bay Mission 69 years after being taken there with other stolen children. He describes on page 27: "One day, without any warning, Alf George got us all together and picked all of these kids out from the mob. Like he was culling cattle. He just rounded up a few of us half-caste boys and girls, got us on the truck and away we went. It was 2 September 1946. I was nine years old. We just left Moola Bulla this day. I did not say goodbye to anyone, not any of the old people who had cared for me for the last three years, nobody. None of us said goodbye". Photo by Chris Hallett. 24 August 2015.

Whilst retracing his childhood steps through the Kimberley, Frank meets Johnny Cooper again. Johnny was three years old when he was stolen from Lamboo Station and taken with the Moola Bulla kids to Beagle Bay mission. Frank describes on page 28, "I don't remember seeing little Johnny's mother that day. Maybe she could not face it. We just picked Johnny up and took him, no clothes, no blanket, no goodbye. We did not see anyone there to support the little guy. The blackfellas were all too scared. They feared the government, they just come and take the kids away, they had no say in it".

In the church at Beagle Bay mission, Frank and his mother's story is found on p202 of 'From Patrons to Partners: And the Separated Children of the Kimberley' by M. Zucker (2005.

A collaboration with ‘Bringing Them Home’ counsellors Gerard Waterford and Frances Coughlan, Living In Hope began with a three-week road trip through the Kimberley, retracing Mr. Byrne’s childhood steps, and meeting with family, friends and fellow Stolen Generations survivors.

Sadly, Mr. Byrne was diagnosed with cancer shortly after returning from this trip. Despite his illness, he continued to work on his book, and he and his writing team completed a full manuscript of his life story shortly before he died.

Mr. Byrne launched the first three chapters of his story as part of the Inland Writers Series by Ptilotus Press at the NT Writers Festival in May 2017 among his family and friends.

“The late Frank Byrne was a storyteller. As a survivor of the stolen generations, he saw acutely how the sins of the past were reverberating in the present. He believed that his story, the story of which he was the boss, could be instructive. And that the telling was important” – ABC Radio National

Mr. Byrne stands alongside his grandaughter, Delphene Byrne, as she reads from Living In Hope at the launch in Mparntwe/Alice Springs, May 2017.

Later that year, Mr. Byrne returned to his country in the Kimberley where he died on 20 October 2017. He is buried beside his mother Maudie Yoorungul in the family graveyard outside Fitzroy Crossing. His story lives on.

“Living in hope is a good title, as Frank’s story shows that hope thrives on openness to what is generous and needful in others. This is a memoir of finding things, not just of losing them. I hope it finds a place in the reading of all Australians who are growing up” – Alice Springs News Online 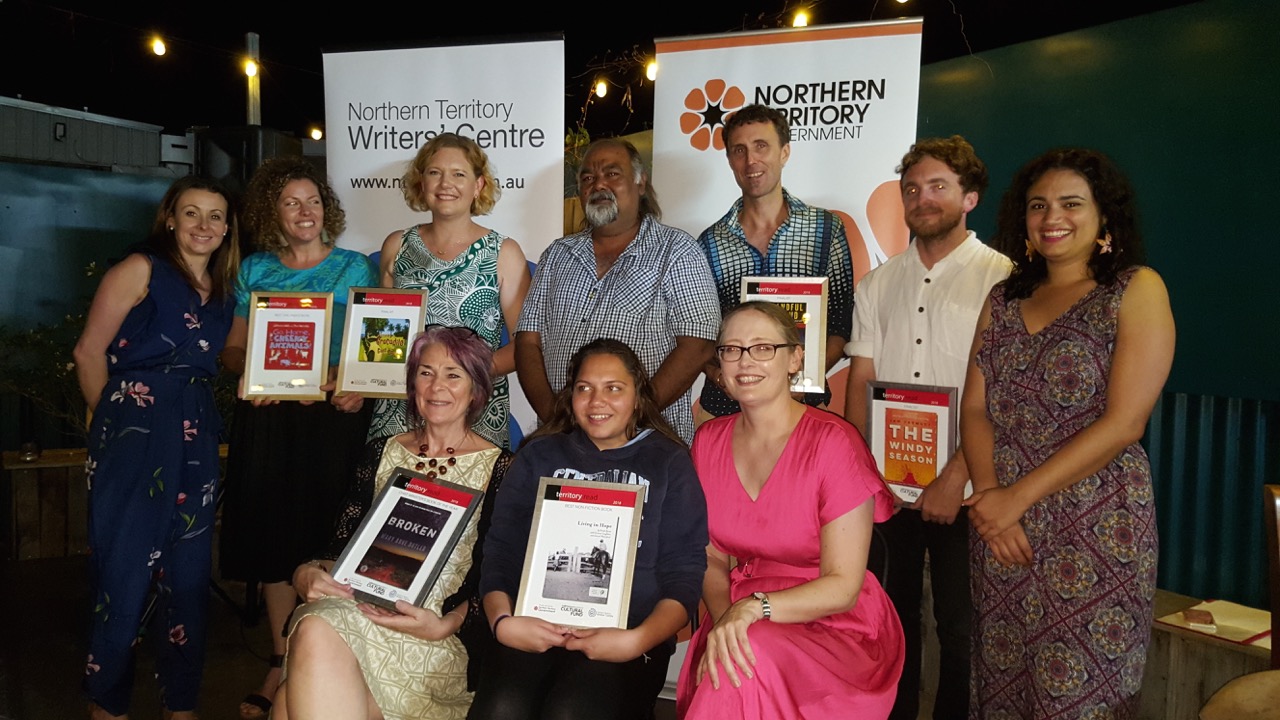 The Inland Writers Series edition of Living In Hope (2017), the first three chapters of his eighteen chapter manuscript, has recieved national and international acclaim since Mr. Byrne’s passing.

It was selected for the Indigenous Literacy Foundation Book Supply program in 2018 which saw over 500 copies enter schools Australia-wide. It won Best Non-Fiction Territory Read Award 2018 by the NT Writer’s Centre and the Most Underrated Book Award 2018 by the Small Press Network.

“Told in simple but powerful language, the story is one that all Australians should read to understand the impact of the Stolen Generations on individual lives’ – Small Press Network

Mr. Byrne’s son, Trevor, accepts the Most Underrated Book Award 2018 on behalf of his father.

In the wake of the MUBA18 award, NewSouth Books (UNSW Press), signed a national distribution agreement with Ptilotus Press and has since distributed Living In Hope to over 60 outlets across Australia and Aotearoa/New Zealand. It is has received national acclaim in the media including by The Age, ABC Radio National, National Indigenous Times and more.

As anyone who has read the small book (which represents the first three chapters of the full-length manuscript), will testify, Frank Byrnes’ story is an extraordinary one – beautifully told; heart wrenching, but without pathos. At the same time, what is a personal story speaks strongly into an historical silence ready to be filled, a literary landscape in need of re-storying. While reports of the treatment of Aboriginal people as a consequence of misguided policy may have emerged in the past twenty years, it is personal life stories that enable us to understand and to empathise. Living in Hope contests the single narrative of this history by fleshing out the life of the child at the centre of it – Dani Powell, Director of NT Writers Festival 2015-2019

In 2019, Living In Hope was selected by the Australian Publishers Association to be showcased at the Frankfurt Book Fair, the largest publishing industry event in the world. A German reader contacted Ptilotus Press with this feedback on the book:

“Dear Ptilotus Press, I got one of your books which is titled “Living in Hope” at 2019 Frankfurt Book Fair and have really enjoyed reading it. I find the memoir very educational especially for someone who comes from Europe and has a limited knowledge about what happened to the Aboriginal people in Australia. The story is very touching and I think it is great that it can be kept in a written form for generations to come. Thank you for publishing such a great book” – Jan